Two months to go until my wedding and I got another project down!  These are the silk flower pomanders that I’ll have hanging from shepherd’s hooks at the beginning of my aisle.  I had considered having these line the aisle like in the picture below, but instead choose to have an aisle runner and rose petals with these at the beginning of my aisle.

You could also use these instructions to make the pomanders out of  fresh flowers or tissue paper flowers.  I chose silk flowers because I didn’t want to be assembling this on my wedding day…..  FYI: this isn’t necessarily a cheap project….

Here are the supplies I used:

I searched around for supplies before I bought these items.  I used 40% coupons for the styrofoam balls at Michaels (also I recommend green balls as opposed to white ones just in case you have some bare spots in your pomander).   I first had bought a 6″ ball and found that made a huge pomander, so I recommend using smaller ones.  I’m going to make a kissing ball out of the larger one. I looked at several stores plus online for the silk roses and found the cheapest ones at Dollar Tree, plus these particular flowers don’t look much different than other stores and they are way cheaper.  I used about 12 “bushes” per ball which was approximately 5-7 stems per “bush”.  I had to go to five different Dollar Trees before I found all that I needed, so if you live in a small town, this might be difficult.  Also, I used buds, mid-open roses and open roses to give the pomanders a more realistic effect.  You could use any other type of wire for this project.  I already had floral wire from my bouts and for my upcoming bouquets, so I used that.  I used Gorilla glue as it expands and I thought it would work well for the styrofoam (which it did).

First, I cut two pieces of floral wire about 3-4″ long and put gorilla glue on the ends after bending them into a shape for the hooks and then stuck the glued ends into the styrofoam balls.  I also put a little dab of glue in each hole after inserting the hooks. 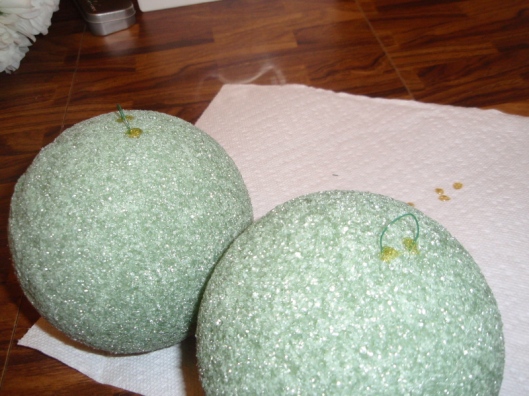 I went through and cut the flowers off each “bush” giving each rose about 4″ stem or so, mixing them up so I had an assortment as I went to stick the stems into my styrofoam balls.  I started on the bottom, sticking the stems close to each other, trying to fill in the gaps. 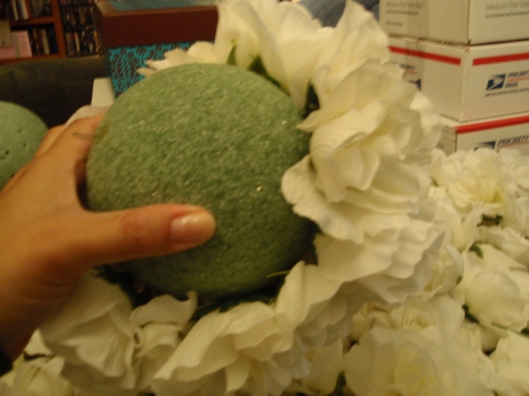 I suggest attaching your ribbon through the wire hoop before you complete the project so that you don’t lose the loop in the flowers and then completing the pomander. 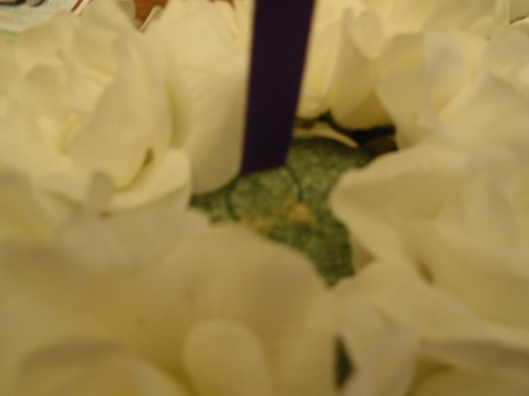 And here are my finished pomanders!  I may add ribbon hanging down from the bottom like the first example, but I’ll see how it looks hanging on my shepherds hooks.  BTW, I also searched around for shepherds hooks and found the best deals and best quality at Lowe’s and Home Depot and each store was about the same price.  I also saw some more ornamental ones at Big Lots, but they were not as good quality and more expensive.  JoAnn also has them and with a 50% off coupon, you could get those pretty cheap.  I paid about $7 each for mine.  I’ll post a pic of my kissing ball at a later date.  Going to go a different route with that and use colored roses. 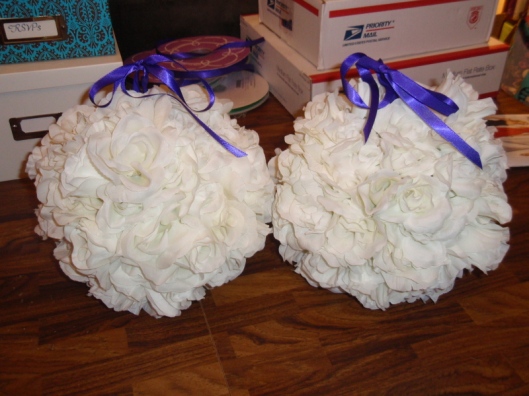 No part of the work displayed on this blog may be reproduced without the author's permission.